Stocks recouped some of the large decline in Aug.  Dow rose 125, advancers ahead of decliners 5-2 & NAZ jumped 35.  While bank stocks are higher, they are not leading the markets & the Financial Index chart still looks dismal (a bad sign for the health of the stock market).

The MLP index recovered 3 to the 331s & the REIT index rose 2 to the 213s.  Junk bond funds were about 1% higher while Treasures are little changed.  Oil is doing little, trying to assess news from LIbya & its implications for the oil market.  There was modest profit taking it gold, but it clearly has the best chart in any market.

Bet the latest market update below:

New home sales fell for the 4th straight month in Jul, putting sales on track to finish this year as the worst on records dating back half a century.  Sales slipped 1% to an annual rate of 298K according to the Commerce Dept, less than half the 700K that represents a healthy market.  Last year was the worst for new-home sales on record. Sales of new homes have fallen 18% in the 2 years since the great recession officially ended.  Sales of previously occupied homes are also weak, falling in Jul for the 3rd time in 4 months & are trailing last year's 4.9M sales (the fewest since 1997). In a healthy economy, roughly 6M existing homes should be sold annually.  Foreclosures & short sales are forcing down prices (a short sale is when a lender accepts less than what is owed on the mortgage).  Those homes are selling at an average discount of 20% which lowers neighboring values.  A telling sign of how bad things have gotten, prices have dropped more since the recession started, on a percentage basis, than during the Great Depression of the 1930s.  The weak housing market will be a major factor in the election next year.


Greek gov bonds slumped, with 10-year yields climbing to the highest level in a month, amid uncertainty over the details of a new loan package.  The spread between Greek & German 2-year yields (key measure of risk) widened to a record 39 percentage points.  Europe is in the midst of agreeing to €159B ($229 B) in new public aid for Greece & some nations have demanded collateral in return for loans.  Spain’s 2-year notes dropped as the country sold €2.9B of bills.  Greek 10-year yields climbed for a 6th day, rising 55 basis points to 17.36%, the highest level in a month.  The nation’s 2-year notes slumped, widening the yield difference over similar-maturity German debt to a whopping 3903 basis points (39.03%), the most since at least 1998.  Continued aid to Greece is uncertain, a very scary thought. 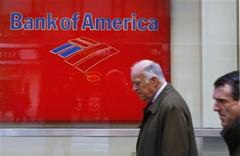 Bank of America, a Dow stock & largest bank in the US, dropped again as investors worried about possible write-offs & capital raising efforts.  The cost of insuring the bank's debt against default spiked to record levels.  Credit default swap insurance jumped 64 basis points to 435 basis points, meaning it would cost $435K per year for 5 years to insure $10M in bonds.  By way of comparison, the bank's CDS previously traded as high as 386 basis points in the ugly days of Mar 2009.  BAC has been leading the slump in bank stocks shown in the Financial Index chart above.  The stock fell 10¢ to 6.32 as it closes in on the $4 lows at the market bottom 3 years ago, another enormous size worry weighing on the markets.

This is a slow time in the stock markets, today sellers are taking a rest.  Oversold markets are working their way higher, but the gains are not impressive.  The biggest hopes by the bulls is that the Federal Reserve will act to spur the economy after their  meeting in Jackson Hole.  Meanwhile European debts remain a mess.  The Libyan situation which directly affects oil is cloudy at best.   And the best news about the US economy is that politicos are away from DC, where they can do less damage.  So far, 10.7K has held up for the Dow.  Volume is light & any whiff of selling could take it below that important floor.

Get your favorite symbols' Trend Analysis TODAY!
Click Here
Posted by Avi at 11:46 AM