Dow rose 75 (but 75 off the earlier highs), advancers over decliners 4-1 & NAZ wa up 20.  Bank stocks continue to benefit from the Warren Buffett rally as the Financial Index is up more than 10% in the last 9 days.

The MLP index jumped 4 to the 356s & the REIT index rose 1½ to the 228s.  Junk bond funds were typically up 1+% in what has been a tough month for them.  Treasuries were little changed as were oil & gold.  But oil is headed for its biggest monthly drop since May, as signs of swelling inventories & faltering demand countered speculation the US will take further steps to bolster its economy.


Get the latest daily market update below: 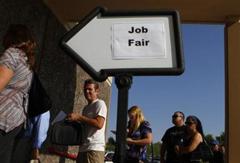 The pace of US private sector job growth slowed in Aug for the 2nd month in a row with employers adding just 91K positions according to the ADP National Employment Report.  The Jul figure was revised down to an increase of 109K from 114K & the Aug gain was the smallest since a disappointingly small 35K in May.  This report gets only mixed grades in forecasting the more important jobs data reported 2 days later.  That Aug jobs report is expected to show a rise in nonfarm payrolls of 75K & a rise in private payrolls of 105K.  Gov payrolls are expected to shrink for the 9th month in a row, but the decline may not be as steep as in the past 3 months since 23K state workers in Minnesota returned after a partial shutdown.

Employers announced more job cuts in Aug than last year.  Planned layoffs climbed 47% from Aug 2010 to 51K according to Challenger, Gray & Christmas. Reductions were led at gov agencies & in the financial industry.  “The private sector once again took a backseat to the government sector, which saw job cuts surge to the second- highest monthly total this year,” John Challenger, CEO of Challenger, Gray & Christmas, said. “More workforce reductions at the federal level are undoubtedly coming down the road. Congress and the White House are under immense pressure to cut federal budgets.”  Compared with Jul, job-cuts decreased 23% but the figures aren’t adjusted for seasonal effects. Gov agencies led the layoffs with 18K job-cut announcements, followed by 8K in finance & 6K in the retail industry.  Big picture, the employment front is not improving.


US factory orders rose strongly in Jul on the biggest jump in demand for autos in more than 8 years & a surge in commercial airplane orders, suggesting supply chain disruptions created by the Japan crisis are easing.  The Commerce Dept said factory orders climbed 2.4%, the largest increase since Mar.  Orders for motor vehicles & parts rose 9.8%, the largest gain since 2003.  The increase follows a decline of 0.4% in Jun.  This good news is probably more timing related, catch up orders are not a sign of ongoing business.

Orders to U.S. Factories Rose 2.4% in July on Demand for Autos, Aircraft

US auto sales failed to rebound in Aug as confidence sank & prospects dimmed for faster economic growth.  Aug vehicle sales (to be released tomorrow) may have run at a 12.1M annual rate, below the pace 12.5M in H1 before slowing to a 12.2M pace last month. The Aug 2010 rate was 11.5M.  Tempered projections for output & job gains caused forecasts for annual sales to be trimmed 900K for this year & next.  Prepare for dreary numbers tomorrow.

U.S. Auto Sales May Have Stalled in Augus


This is a quiet week when small amounts of buying or selling can produce fairly big swings.  Some said the rise in factory orders was good news, ignoring that it could be more timing related.  Bulls are happy, they always like to see rising markets (especially after what has been a rough month for stocks).  With the Fri jobs report looming, chances are not a lot will be decided until then.

Get your favorite symbols' Trend Analysis TODAY!
Click Here
Posted by Avi at 11:33 AM