Dow gained 109, advancers over decliners 5-1 & NAZ was up 17.  Bank stocks are leading the way up but the chart for the Financial Index still looks dismal (down YTD & over the last 12 months).

The MLP index rose 5+ to the 356s, taking it above the critical 350 support level & the REIT index was up almost 5 to 223.  Junk bond funds rose about 1% & Treasuries were marginally lower.  Oil rose on news that Japan's economy contracted less than estimated in Q2.  Gold inched higher looking to build a base for another advance.. 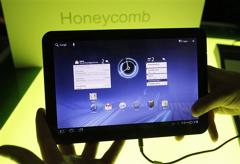 Google is buying cell phone maker Motorola Mobility for $12½B ($40 per share, 63% above the Fri close), by far its biggest acquisition & a sign GOOG is serious about expanding beyond its core internet business.  MMI was separated from the rest of Motorola in Jan & the company has remade itself as a maker of smartphones based on Android.  "Motorola Mobility's total commitment to Android has created a natural fit for our two companies," said Google CEO Larry Page. "Together, we will create amazing user experiences that supercharge the entire Android ecosystem for the benefit of consumers, partners and developers."  GOOG dropped 15 & MMI shot up 13.78 to 38.25.

Lowe's reported weaker-than-expected sales & cut its fiscal-year outlook for the 2nd time in 3 months as homeowners put off big renovations in an anemic US economy.  LOW is a victim of the ailing economy, weak housing market as well as cut-throat competition from larger rival Home Depot (HD).  US homebuilder sentiment remained stuck near historic lows in Aug & consumer sentiment worsened sharply in early Aug, falling to the lowest level in more than 3 decades.  "The volume of negative news and the unsettling impact on equity markets is having a significant effect on already fragile consumer mindset," CEO Robert Niblock said. "Consumers continue to focus on small ticket, less than $500, repair and maintenance items and projects."  Lowe's sales rose 1.3% to $14.5B in Q2, missing estimate of $14.75B & EPS was 64¢ ahead of 58¢ last year.  "Despite some recovery in our seasonal business, our performance for the quarter fell short of our expectations," Niblock said.  LOW fell 27¢ after having a tough time in 2011.

Markets opened the weak stronger, they are feeling good.  Of course, they remain in an oversold condition, so bargain hunters can be expected to be shopping.  The MLP index has rebounded over 40 off its lows last Mon.  But fundamental problems have not gone away.  There are growing worries about the European economy sliding & the US economy doesn't look so good.  European sovereign debt problems have brought many of their biggies back off holiday to do some patching & budget deficit problems continue in the US.as it adds $4B every day.to the annual deficit.  Bulls are happy with the bounce by the Dow off its lows last week. & a sense of calm in the markets.
Dow Jones Industrial Average (^DJI)