Like stocks, the MLP index gave up some of its recent gains & the REIT index slipped a fraction in the 225s.  Junk bond funds inched higher & Treasuries gained.  Oil was lower on concerns about economies in Europe, i.e. Germany.  As investors became more nervous they sought out gold again, bringing it back near the record highs last week. 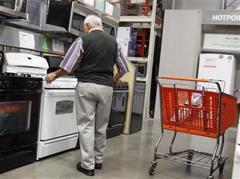 
Home Depot, a Dow stock, raised its fiscal-year profit forecast for the 2nd time in 3 months as timely promotions & a focus on cheaper products helped it gain market share from rival Lowe's (LOW & a Dividend Aristocrat).  Same-store sales rose in all but 3 of its top 40 markets, with particular strength in Midwest & South Atlantic regions, CEO Frank Blake said, adding he was "encouraged that soft housing markets like California, Florida, Arizona and Nevada were positive in the quarter."  HD still expects fiscal-year sales to rise 2.5% & forecasts EPS of $2.34 excluding stock repurchases, up from a prior forecast of $2.24.   In Q2, sales at stores open at least a year, rose 4.3% globally, including a 3.5% rise in US, making it the 9th consecutive qtr that it has outshone its smaller rival (LOW same-store sales fell 0.3%).  Same-store sales thus far into Aug are "quite positive," CFO Carol Tome said.  HD reported a 1.1% rise in the number of customer transactions, while the average ticket rose 3.3% to $54.04.  Q2 EPS rose to 86¢ from 72¢ a year earlier, easily beating expectations of 83¢.  Sales increased 4.2 % to $20.23B, beating estimates of $19.9B.  Demand was strong for building materials & outdoor garden products as HD has shifted focus to cheaper products such as faucets & paint to increase shopper traffic.  The stock rose 1.66.
Home Depot Raises Annual Forecast as Quarterly Profit Beats Estimates 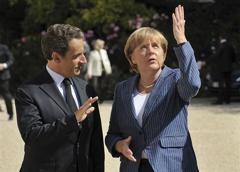 
France & Germany called for a "new economic government" for Europe, with mandatory balanced budgets enshrined in the constitutions of all euro zone members as a way to overcome the debt crisis that has threatened the common currency.  French President Nicolas Sarkozy & German Chancellor Angela Merkel's push for long-term political solutions instead of immediate financial measures, like a single European bond, sent the € sliding, down half a penny to $1.44.  They also proposed a Europe-wide tax on financial transactions & pledged to harmonize their countries' corp taxes.  But it's unclear how the euro bloc will put in place what its leaders have suggested & how a proposed tax on financial transactions may affect demand for European assets.  Sarkozy & Merkel stressed their commitment to defending the common currency & presented their proposals after meeting amid signs of economic slowdown.  They want a "true European economic government" that would consist of the heads of state & gov of all eurozone nations.  Markets sold off initially because they were hoping that new European bonds would solve Euro problems.
Merkel, Sarkozy to Shun Euro Bonds


Berkshire Hathaway increased its stake in  Wells Fargo (WFC), building equity holdings amid a markets decline that the Warren Buffett said provided an opportunity for buying stocks “on sale.”  His firm added 9.7M shares of the biggest US home lender in Q2, boosting its holding 2.8%.  “I like buying on sale,” Buffett said. “Last Monday, we spent more money in the stock market buying than any day this year.”  The increase in the WFC cost BRK.A about $277M.  Buffett remains a bullish investor.  BRK.A's high priced stock fell $761 & WFC was down 47¢ in a weak bank sector.
Buffett Increases Wells Fargo Stake

Trading today was not that meaningful.  Stocks sold off significantly, especially after the news that there were no dramatic results following the big meeting of the European leaders.  That emotional reaction did not last long, buyers returned to limit losses.  However the upward momentum that had carried the markets in the last few days was lost.  Global economic & financial problems drone on, not good for stock markets.  Dow is up 250 this month but there may be more selling ahead.  Sep (when Congress returns) is statistically the worst month for stocks followed by wild Oct.

Find out what's inside Trend TV!
Click Here
Posted by Avi at 4:45 PM