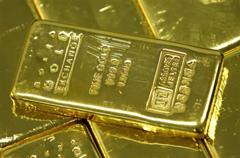 The record drop for the MLP index yesterday is being followed by a record up day today.  The index added 18 to the 334s.  The REIT index gained 7+ to the 202s & junk bond funds were up around 3% (big by their standards).  Treasuries pulled back after their enormous run in the last few weeks. Oil is also having a modest recovery.  Gold hit a record high in its biggest 3-day rally since the depths of the financial crisis in 2008

US home values had their smallest decline in more than 4 years in Q2 as the share of borrowers with negative equity shrunk, according to Zillow. 26.8% of single-family homeowners with mortgages owed more than their houses were worth, compared with 28.4% in Q1.  Values fell 0.4% from Q1, the smallest drop since Q1 of 2007. While the Zillow Home Value Index fell 6.2% from last year, the rate of depreciation is slowing.  A temporary decline in bank repossessions, caused by court delays & paperwork errors, may be preventing a more significant drag on home prices.  Foreclosure filings dropped in 84% of the largest US cities in H1 as attorney generals in all 50 states investigate allegations of shoddy practices by lenders & servicers.  A ray of good news for troubled housing, but hardly signalling a recovery.


The Jul inflation rate in China accelerated to the fastest pace in 3 years, limiting the scope for monetary easing to support growth.  Consumer prices climbed 6.5% from a year earlier as food costs surged, more than the 6.4% estimate.  Elevated inflation shows that China is still dealing with the after-effects of an unprecedented monetary expansion during the last global slump & may have limited room for more stimulus. At the same time, a weaker-than-forecast gain in industrial production added to signs that a moderation in economic growth may help to cool price pressures.  Industrial output rose 14% in Jul from a year earlier, less than the 14.6% expected & a 15.1% gain in Jun.  Retail sales rose 17.2%.  Fixed-asset investment excluding rural households climbed 25.4% in Jan-Jul from a year earlier.  China’s producer prices rose 7.5% in Jul from a year earlier, the biggest gain in almost 3 years, after jumping 7.1% the previous month.  Food costs climbed 14.8% & non-food inflation was 2.9%. Any cooling of the Chinese economy will be felt around the world.

The  president & House Rep  leaders showed no sign of backing off their stances on how to cut the federal deficit.  Obama said yesterday that “common sense and compromise” should lead to a deficit-reduction plan that includes spending cuts & more tax revenue (tax hikes on the rich).  “It’s not a lack of plans or policies that’s the problem here,” Obama said. “It’s a lack of political will in Washington.”  House Speaker John Boehner & Majority Leader Eric Cantor responded with statements saying both sides should be able to find cuts in mandatory spending, such as Social Security & Medicare, to make enough progress on the long-term shortfall.  “Republicans demonstrated this problem can be solved without job-destroying tax hikes,” Boehner said.  Both sides sought to reassure global investors but that was not accomplished.  DC remains deeply divided & that division is only getting worse.

The recovery from a vastly oversold market is not all that impressive, maybe because fundamental problems have not changed.  There is hope that Ben Bernanke will come up with a magical QE3 at the FOMC meeting to help the markets, but that is still speculative.  It is also less clear on what goodies he has left with rates already at or near record lows.  DC is deeply divided, but most are away for the summer break so little will be accomplished until after Labor Day.  The pres is busy with fund raising events.  That's called first things first!  Asian markets had a bad time of it on the overnight.  Their economies are doing well, but the the threat of losing business with their #1 customer, the US, is shaking their stock markets severely.