The Alerian MLP Index gained 1+ to over 340 while the REIT index slipped a fraction in the 214s. Junk bond funds were higher as were Treasuries.  Oil declined, narrowing the first weekly gain in 5, on speculation that US measures to revive growth will fall short of expectations & that potential fuel shortages caused by Hurricane Irene might be limited.  Gold rose for a 2nd straight day after Bernanke offered no plan for further monetary easing, sending equities lower & boosting the appeal of the precious metal as a haven.

Ben Bernanke said that central bank policymakers will take a closer look next month on whether they should take additional short-term steps to jumpstart economic growth.  Hes aid that a one-day meeting of the Fed, originally set for Sep 20, is being expanded to 2 days "to allow a fuller discussion" of what the central bank should do to respond to "disappointing" growth.  "The Federal Reserve (FED) will certainly do all that it can to help restore high rates of growth and employment," he promised.  He also cautioned the FED's powers are somewhat limited & much of the responsibility for action will have to lay with a gridlocked Congress.  "Most of the economic policies that support robust economic growth in the long run are outside the province of the central bank," he said.  And he warned that when Congress weighs future deficit reduction plans, it should be careful to not hurt the economy in the short-term. They "should not...disregard the fragility of the current economic recovery."  He added there needs to be a better way of Congress making decisions on taxes & spending.  And he said a repeat of the this summer's contentious debate over raising the debt ceiling would likely hurt the economy.  "It is difficult to judge by how much these developments have affected economic activity thus far," he said about the threat of default & the downgrade of the US credit rating. "But there seems little doubt that they have hurt household and business confidence and that they pose ongoing risks to growth."  There was no magic from Ben this time, markets initially sold off. 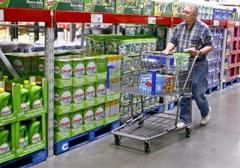 Consumer sentiment sank in Aug as consumers lost confidence in lawmakers' ability to stave off the threat of another recession.  The Thomson Reuters/University of Michigan's consumer sentiment index edged up from its mid-Aug level but was still consistent with recession-era lows.  The index has only been lower in 3 other surveys, which were taken in Apr & May 1980 & Nov 2008.  The final reading on the overall index of consumer sentiment was at 55.7, down from 63.7 the month before but slightly better than preliminary reading of 54.9, which had been the lowest level since May 1980.  "Consumers have shifted from being optimistic about the potential impact of monetary and fiscal policies to a sense of despair and pessimism about the role of the government," said survey director Richard Curtin.  Recent political wrangling over raising the US debt ceiling appeared to take its toll.  Spontaneous negative references to the gov were made by 25% of respondents, above the prior record of 20% in Apr 2010.  The barometer of current economic conditions was 68.7, down from 75.8 in Jul & below a forecast of 69.3.  The component is at its lowest level in 2 years, just after the official end of the recession.  The outlook also worsened, with the consumer expectations falling to 47.4 from the final reading of 56.0 for Jul.  More gloomy news on consumer expectations.

U.S. Michigan Consumer Sentiment Index Dropped to 55.7 in August From 63.7

The US economy grew at a meager 1% annual pace in Q2, slower than previously estimated & the downward revision will likely increase fears that the economy is at risk of another recession.  Fewer exports & weaker growth in business stockpiles led the Commerce Dept to lower its estimate for Q2 from its previous rate of 1.3% growth. That means the economy expanded at only a 0.7% rate in H1.  9 of the past 11 recessions since World War II have been preceded by a period of growth of 1%.  The sell-off of stocks could hurt growth in H2, if consumers & businesses pull back on spending & investment.  High gas & food prices have already eroded consumers' buying power.  Spending increased only 0.4% in Q2, the weakest growth since the Q4 2009.  People bought fewer long-lasting manufactured goods, such as autos & appliances.  Those purchases fell 5.1%, the biggest drop since Q4 2008, partly reflecting a shortage of autos on many dealer lots after the Mar earthquake in Japan.  Gov spending contracted for the third straight qtr & spending by state & local govs declined for the 7th time in 8 qtrs.  The economic recovery is sputtering.

Europe is still trying to repair sovereign debts.  Greece solicited support from 57 countries for private investor involvement in a rescue plan, saying it could scrap the debt swap if participation by banks didn’t reach 90%.  This is just one off many time bombs in Europe that are not going away.  Ben's speech said nothing new, pretty much what the realists were expecting.  Now that that excitement is over, stocks may drift today with an upward bias.