Stocks are higher again.  Dow rose 92, advancers ahead of decliners only 5-4 & NAZ was up 13.  Market leaders bank stocks are pulling back.

The MLP index rose a modest 1+ to 356 & the REIT index slipped a smidgen below 219.  This is a quiet day after an usually wild week.  Junk bond funds were down a few pennies but there was buying in Treasuries.  Oil advanced after US retail sales climbed in Jul, signaling that spending in the world’s biggest crude-consuming country is holding up.  Gold fell, reacting to increased margin accounts for traders. 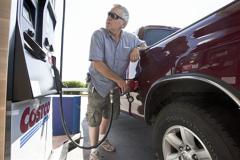 Consumers spent more on autos, furniture, clothing & gas in Jul, pushing up retail sales by the largest amount in 4 months.  Retail sales rose 0.5% according to the Commerce Dept, the best showing since Mar.  Sales were also revised higher for the previous 2 months.  Even after excluding sales at gas stations, sales rose 0.3%.  The data for Jul suggests the economy may be in better shape than some had feared.  Layoffs are down, retail sales are up & gas prices are falling.  This is the first read on consumer spending for Q3  The gains in Jul follow Jun when consumers cut spending for the first time in 20 months.  Auto sales rose 0.4% after a 0.7% gain in Jun. Demand for cars has been low this year, & many dealers have also had a hard time stocking popular models because of supply chain disruptions stemming from the Japan crisis.  Gas sales rose 1.6%, largely because of the rise in gas prices that have since been reversed.  Moderately good news for the economy.

Retail Sales in U.S. Climb by Most in Four Months 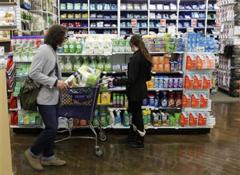 On the other hand, consumer sentiment worsened sharply in early Aug as it fell to the lowest index level since 1980.  The drop came from fears of a stalled recovery combined with despair over gov policies.  The Thomson Reuters/University of Michigan's preliminary Aug reading on the overall index on consumer sentiment fell to 54.9, the lowest since May 1980, down from 63.7 in Jul (well below the forecast of 63.0).  High unemployment, stagnant wages & the protracted debate over raising the gov debt ceiling spooked consumers who were polled before the S&P downgraded the gov credit rating last Fri.  "Never before in the history of the surveys have so many consumers spontaneously mentioned negative aspects of the government's role," survey director Richard Curtin said.  "This was more than the simple recognition that traditional monetary and fiscal policy measures were largely spent; it was the realization that the government was unable or unwilling to act," Curtin added.  Two-thirds of all consumers reported that the economy had recently worsened, & just one-in-five anticipated any gains during the year ahead.  Bad times in the economy were expected by 75% of all consumers in early Aug, just below the all-time peak of 82% in 1980.  This is current data whereas the retail sales are a month old on average.

JC Penney reported flat Q2 profit as it aggressively marked down prices on fashions to get middle income shoppers to keep spending in an increasingly uncertain economy & issued Q3 profit guidance that was below estimates.  "The challenging economy continues to impact the moderate consumer," said Myron E. Ullman III, Penney's CEO.  EPS was 7¢ for the qtr ended Jul 30, above 6¢ last year. & revenue fell slightly to $3.91B.  Revenue at stores opened at least a year rose 1.5%.  Analysts were looking for 10¢ on revenue of $3.91B.  The company expects revenue at stores opened at least a year to be up 2-3% in Q3 & also noted that its gross margin rate is expected to be down slightly for the same period compared with the year ago.  JCP expects EPS of 15- 20¢ in Q3 versus 27¢ by analysts.  The stock dropped 93¢.

The VIX, the volatility index, fell 3 to 36 after an exciting week.  Nerves are jittery but calming down for the moment. Dow has cut its weekly losses to "only" 200, but everybody will remember this week for months to come.   Fundamental problems remain.  European debt issues are a mess.  The US survived a debt debt downgrade with continued strong demand for Treasuries, but the economic recovery is sputtering.  And then there's the budget mess which this super committee from Congress is supposed to solve.  Dow is down 900 in Aug & may be lucky to limit its monthly loss to that. Get your favorite symbols' Trend Analysis TODAY!
Click Here
Posted by Avi at 11:39 AM